Title: No One Else Will Do
Author: Layla Aaron
Feedback address: kronos4me@gmail.com
Date in Calendar: 18 June 2012
Fandom: Lost Girl
Pairing: Bo/Kenzi
Rating: PG
Word Count: 1,553
Summary: Bo realizes why no one other than Kenzi will do as her sidekick.
Spoilers/Warnings: Episode spoilers for 2x12, 2x13, 2x14
Feedback: Always appreciated
Advertisement: Part of the FSAC:DD12

Author’s Disclaimer: These characters are the intellectual copyrighted property of creator Michelle Lovretta and production company Prodigy Pictures, in association with Shaw Media. This is purely for enjoyment and entertainment. This is not meant to infringe on the copyright in any way.

Author’s Notes: I’ve taken a little creative license with the opening of 2x14. I’ve also made the assumption that all flavors of Ben & Jerry’s ice cream is available in Canada. 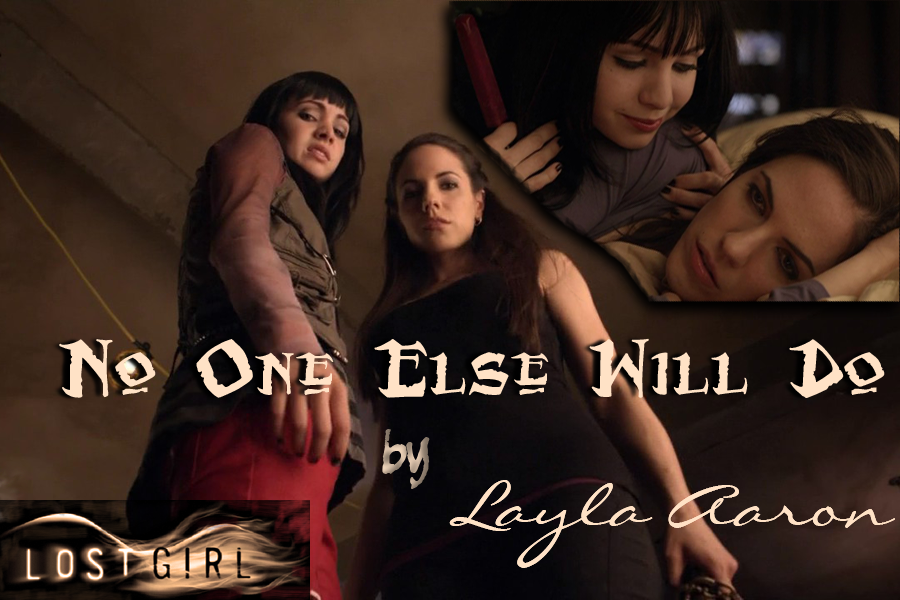 Every superhero needed a sidekick. So did every superhero fae. Bo figured it must be in the contract, and she couldn’t have picked a better sidekick than Kenzi if she’d tried. From the night she’d saved Kenzi from a sure case of date rape to the last time her friend pulled her ass out of the way of some big bad fae villain, Kenzi had become a permanent presence in Bo's life. The human won her over when she risked death at the hand of any number of fae to pull Bo back to reality during the trial. She couldn’t imagine her life without the other woman, and if she tried, all she saw was a dull, tedious future.

Spunky, resourceful, with a wicked sense of humor and great taste in weapons, the other woman made every day an adventure. Quirky and witty, Kenzi was always ready with a quick quip or a pair of brass knuckles. Despite all the shit most fae and life in general threw in her direction, Kenzi stood out. Not just as a human, but as a determined survivor. Perhaps this was why Bo felt more settled when in Kenzi’s presence. No one else had that same impact on her. Not Dyson or Lauren or Hale or Trick; only Kenzi.

Where else but home would she go after spending the day chasing around for a healing mask for the shaman who’d placed the curse on Nadia? Who else but Kenzi would she seek out when she stumbled upon something that left her feeling like she’d been kicked in the gut? After seeing Lauren with a revived Nadia, Bo ran for home and her best friend and a shared pint of ice cream.

Surrounded by people there to celebrate her birthday, Bo never felt so alone. As trite and clichéd as that sounded, it was true. She watched Dyson murmuring in Ciara’s ear and Ciara’s smile in response to whatever he said to her. She watched Lauren cuddling with Nadia, hands entwined and secret smiles shared. She watched Kenzi flirt with Nate then quickly looked away. Even Trick and Hale had dates. In between watching the party guests, she watched her arsenal grow. A dagger to replace the one turned into a pile of sand in Madagascar. Steel shurikens to keep enemies from getting too close. A sword masquerading as a walking stick. Then a handsome man appeared out of nowhere to give her a beautiful handcrafted bracelet. He disappeared without a word, and she once again resumed her couple watching, allowing the self-pity to fill her.

Bo felt guilty for wallowing in her loneliness in the middle of the fun surprise party Kenzi had thrown for her. She glanced around at the streamers hanging from the ceiling and the dozens of maneki-neko waving their paws at her. Unsure of why Kenzi chose the Japanese lucky cats for the party décor, Bo assumed their waving paws were beckoning her to enjoy her good fortune of being surrounded by friends. She let out a sigh and sipped her wine. While stroking the bracelet, she started counting the hours until her humble abode was empty so she could let the tears roll freely down her cheeks.

How did a succubus end up feeling so alone at her own birthday party? Losing Dyson cut like a knife, but she had Kenzi. Losing Lauren left a hollow spot inside her, but she still had Kenzi. Now suddenly, someone else had Kenzi, and Bo felt adrift. She knew the friendship would never sever, barring death or the apocalypse or some Fae baddie stealing away Kenzi. But watching Kenzi with Nate made Bo realize just how much she depended on her friend for support and love. The presence of Nate changed everything. And even if Bo didn’t want to admit it, she felt a hint of envy that Kenzi needed and wanted someone other than her. Bo drained her wine glass and refilled it from the bottle on the table nearest her. She dropped her head to the back of the sofa, closed her eyes, absently fingered the bracelet, and listened to the people around her. As much as she appreciated what Kenzi had done, all she really wanted was a long bath followed by sitting in bed and sharing a pint of her favorite ice cream with Kenzi.

The earth seemed to further tilt on its axis after her surprise party, and it sent Bo spinning out of control. The news of Lauren recommitting her loyalty to The Ash was the final straw. Her own confrontation with Lachlan left Bo in a daze, shaking her head and wandering around aimlessly. His request for her to be his champion against The Garuda stunned her, shaking her to her core. She needed the reassurance of her Kenzi. As if on autopilot, her feet took her home to the one who gave her security and stability, to Kenzi.

Even without focusing her gaze on Kenzi, Bo knew something was different. As a succubus she could almost taste the change in her friend, but distracted by her thoughts, Bo didn’t see it clearly. Even though the evidence of the change was in Kenzi’s aura right in front of her, it slipped her notice. Over and over, she heard The Ash’s words echo in her head, his request to her. What she wanted was a hug from Kenzi, reassurance that she could battle this ancient fae and save all of faekind. She needed words of encouragement to tumble from Kenzi’s lips. Instead, Kenzi was talking about sexting and what a wonderful day it had been. A bit of reality struck home when Kenzi grabbed her hand and revealed she’d had sex with Nate. Then Bo saw it clearly, the alteration in Kenzi’s aura. She congratulated her friend then absently told her she should go with Nate on his tour, the words she uttered never really sinking in until it was far too late to take them back.

And then she stood alone in the kitchen, murmuring to herself about getting up the next morning to save the world. The reality hit her the following morning when she called out to Kenzi, asking about the sharpening stone. The silence of the house almost deafened her. She found Kenzi’s note immediately after she found the empty coffee carafe, and the sharp bite of pain cut her to the core.

For a brief moment, Bo regretted never truly marking Kenzi as her own. That flicker of a thought exited her mind almost as quickly as it entered it. She knew doing such a thing would leave Dyson, Hale, and Trick wondering who or what had possessed her body. Not to mention what Kenzi herself would think of Bo. No, permanently marking Kenzi would not diminish the pain filling her chest. Only seeing her friend, wrapping her arms around her in a hug, would do that.

She knew what she felt for Kenzi was love, a love borne of something other than lust and sex. Still learning what it meant to be a succubus while surrounded by people who understood what it meant to be fae, Bo wondered how she’d developed this deep love for Kenzi. Lust and sex were as essential to a succubus as air, so where did her relationship with the other woman fit in? They weren’t lovers; they weren’t even friends with benefits. They were best friends, sisters from different mothers. She didn’t know if it was normal for a succubus to love someone without sex involved. The answer to that question joined a host of others she was trying to answer as she continued to adjust to life as an unaligned fae caught between the worlds of the Light and Dark Fae.

Bo needed to think. She needed her go-to comfort food. Most people considered something warm and creamy to be the ambrosia of comfort. Not her. Long ago, she realized the healing power of something frozen and creamy. Her roommate seemed to share the same taste in comfort food. She and Kenzi kept their freezer stocked with a variety of flavors of ice cream. Bo opened the freezer and grabbed the nearest pint of ice cream. She didn’t care what flavor she ate; she just wanted something that would remind her of Kenzi.

A piece of paper attached to the container lid caught her attention. She laughed at the words scrawled on the note.

Bobilicious, my favorite sexy succubus! What other flavor could be so succubus-y? It sounds like something you would do, not eat. Maybe you can find someone who’ll let you eat it off their abs. Enjoy! Your BFF, Kenzi

Bo tilted the container to read the name. Shaking her head, she laughed again. “Ben & Jerry’s Karamel Sutra, a core of soft caramel encircled by chocolate and caramel ice creams and fudge chips,” she murmured. She grinned while reaching for the nearest spoon. Bo settled on the sofa, her legs curled under her and enjoyed the frozen gift from Kenzi. This was why she loved Kenzi; only Kenzi knew her this well. Only Kenzi could be nowhere in sight and still make her laugh despite her future confrontation with one of the fae’s greatest enemies. No one else but her BFF.