Thank you for your participation in the FSAC :: DD09.

We want to note that 20 people voted this time around.

Note: This award was based on the overall point totals of all the entries in groups 1, 2, & 3.

This year, our award goes to the two pieces of original fiction that were submitted to the calendar. Both of us kept going back to these two stories when we would discuss all of the entries posted and how we would vote in the four categories.

Lifetime Achievement Award :: Celievamp
Celievamp is the only person who has contributed to every single calendar, outside of Shatterpath and Stormwriter, and she's given multiple entries to each calendar. We wanted to use this award to thank her for her continued dedication and participation in our calendars.

Sandbox Award :: Annette
Annette has been one of the people willing to come play in the Light, Water, Muses sandbox that Shatterpath and Stormwriter created. She started by creating the incredible LWM Strega Tarot Deck, then took it upon herself to make the pairing of Alexis/Tory her own within our universe. We wanted to use this award to thank her for her continued dedication and participation in the LWM universe.

Because this was our 10th calendar [and our 5th year of doing them], we chose to give out prizes for the top awards.

Participants Award :: graphic
This idea came about while talking to shaych_03, who reminded AJ that the tradional gift for a 10th wedding anniversary is aluminum. AJ made the initial graphic, then shaych_03 made it better. 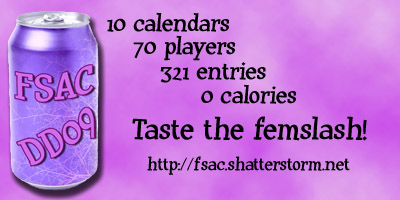