Title: My Sisters Keeper
Author: Annette
Feedback address: newbie_2u@livejournal.com
Date in Calendar: 21 June 2009
Fandom: LWM
Pairing/Characters: Tory, eventual/implied Tory/Alexis
Rating: PG13
Word Count: 1,130
Summary: Can a sister she never really knew hold the key to her future?
Series: Light, Water, Muses (an alternate universe for a variety of television series). See disclaimers below.
Advertisement: Part of the FSAC:DD09. Huge props to AJ and Jenn for all they do to produce these amazing calendars!

Note: Author's Notes: This story follows my entry in the FSAC::DDoS 2008, Just One Reprieve, in which the character Tory is introduced to the LWM family and is meant to be a bridge to the next, longer piece. I hope that this story is able to stand alone, but if you read JOP first you will better understand this piece.

Very special thanks to AJ and Jenn for allowing me to once again dip my toe in the Light, Water, Muses fandom.

I'm not sure where I am right now. Last time I checked I was asleep in a room somewhere below the desert in a compound in Nevada. Although I've never had an issue with sleep-walking, at the moment I find myself drifting through some pretty dense vegetation. I'm definitely not in Kansas anymore -- or Nevada for that matter. You would think I'd be pretty freaked out right about now but I'm feeling surprisingly calm -- as if I am meant to be here even though I have no idea where here is.

The trees and vines seem to be thinning out and I'm catching brief glimpses of the sky. I'm having an easier time navigating toward whatever awaits me up ahead and am soon standing at the top of a small hill which overlooks a clearing amidst a sea of tall grass. I am feeling a bit weary from the trek I just made and so I drop to the ground in the shade of the trees. I still have a clear view of the area below and am soon mesmerized by the gently swaying grasses.

My eyes are growing heavy and I feel as if I am about to fall asleep when I spot something moving toward the clearing - what it is I can't say as the grasses hide its identity. I don't feel threatened by its presence and so I remain where I am as the grass parts and the creature moves into the open. At first I think it may be a dog but as it fully emerges I can see that it appears to be a small wolf of some kind. I've always been fascinated with wolves and this one appears to be a Red Wolf -- an almost extinct species. I am overjoyed at my good fortune at seeing one when I remember that this is not real.

The wolf pauses in the clearing and scents the air, swiftly honing in on my presence and looking directly at me. Again I feel no threat and so I remain where I am as the wolf approaches slowly. When it is but a few feet away it stops and sits directly in front of me and I am amazed at the beauty of this creature -- even if it is only a figment of my dreamscape. We continue to stare at one another when I see the wolf begin to -- I'm not sure how to explain this but it seems to be morphing into something else. Its shape is becoming fluid and reforming and I begin to wonder if this is where my dreamscape turns dark.

For the first time since this all began I'm feeling a bit nervous but I refuse to run from whatever is happening. I watch in fascination as the figure in front of me begins to take on a human shape, a female human shape. As the features begin to coalesce I feel as if I recognize this person -- soon I am proved correct as I am looking into my own eyes. Well, that's not entirely true, she looks a lot like me but she's not me. She looks like she could be my sister Oh God, what is this, some cruel joke!

I never knew my sister, she died well before I was born, but I often wondered what she would have been like. I dreamt of her all my life -- had secret conversations with her almost every day -- until one day I just couldn't hear her anymore. I had just turned fifteen and my interests changed as I entered high school. I made a few friends and spent my time doing everything I could to annoy my parents.

My parents were another story I was a completely unexpected accident and as such always felt as if I had one strike against me. There were times when I caught them looking at me strangely, especially when they'd catch me having what appeared to be one-sided conversations with my long-dead sibling. They were relieved when I stopped but they soon found themselves troubled by my rebellious behavior. It appeared that they were at a loss as to what to do about me and so I'm guessing they decided to just ignore me. At least that's how it felt -- I came and went as I saw fit until one day I just never returned. I don't even know if they tried to find me.

I was drawn from my memories by the sound of something else moving through the grass. As I turned toward the clearing below the figure next to me once again assumed the shape of a Red Wolf and turned toward the clearing as well. I can see the grasses part in the path of the creature so I know it is much larger than the small wolf next to me. I am soon proved right as I see the big cat from my dreams emerge and move into the clearing. I now know that it is a spotted leopard -- the spirit animal of the woman I have yet to meet and that I am somehow supposed to help.

The cat seems weary and I watch as it slowly turns toward us and sits, its gaze drifting over me to land and stay on the red wolf to my right. The wolf's attention is equally focused on the big cat -- as if they are sharing some sort of silent communication. Then I hear a noise, a chuffing sound coming from the cat below and my attention turns to her. She is now looking directly at me and I gasp as I see the sadness in her golden eyes. I cannot look away and I attempt to let her know that I am willing to try to help. She continues to stare at me for a few more minutes and then something amazing happens -- her eyes shimmer and turn a bright blue!

I look to the wolf to see if she's noticed and find that she is staring -- not at the cat below, but at me. Again I am captured by a pair of golden eyes only this time they don't change instead the wolf rises and leaps at me. I brace myself for the impact but it never comes, it's as if she has passed right through me. I look behind and all around me but see nothing, my gaze shifts to the clearing below and the big cat is gone as well. I rise and begin to move back the way I came, confused by these events and wondering if I will remember any of this when I wake up. What does all this mean? Perhaps the dark-haired one --I believe her name is Monica -- can help me sort it out. 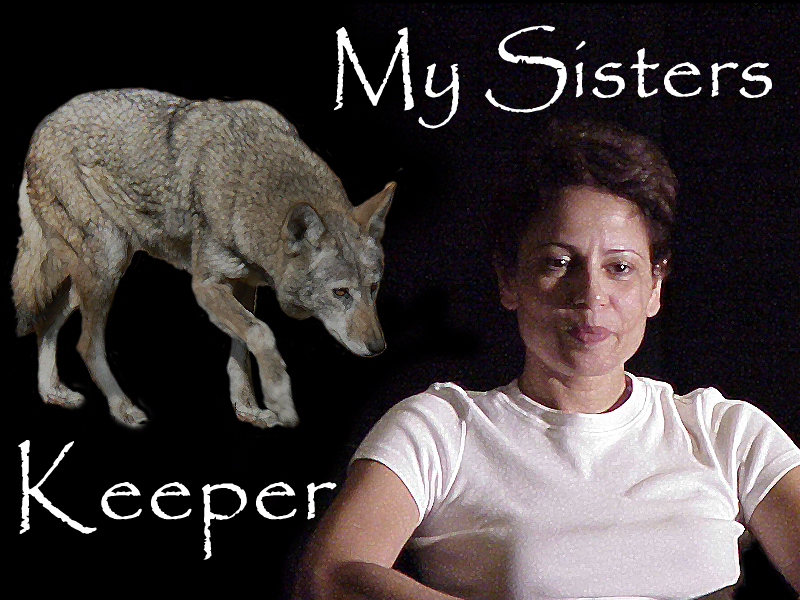